An organisation that operates a small number of RADARs realised that some of the electronics used in their systems were becoming obsolete. The concerns that this older technology might eventually fail and there be no replacements available made them want to install a new system. This gave them the opportunity to add some new features at the same time.

Their business relies on producing data from their RADAR that is not produced by other systems, so they could not buy an off the shelf RADAR system. Of course it would have been possible to make a full custom design for the new RADAR, but they only operate a small number of them making it impossible to justify the costs of that. 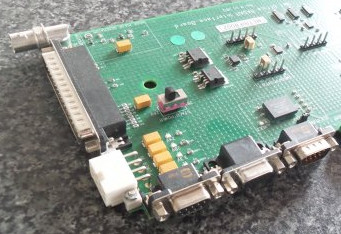 They identified the mechanical and RADAR transmit and receive components that they could use and searched for the electronics that they would use. They had some VHDL that had been used in the previous version of the system, so wanted an FPGA board to form part of the system. Then they could re-use some of their design, and easily add new features that they wanted. They needed Analogue to Digital Conversion ( ADC ) to digitise the RADAR signal and needed to control the transmitter, a wave guide switch, produce a reset signal etc.

The various parts that needed to be connected all had different connectors, and had a variety of signalling standards ( voltage levels ). Additionally some signals required optical isolation for electrical safety.

One of our Engineers collated these requirements and proposed a custom designed electronic circuit board to act as an interconnection hub for these various system parts. He proposed that there were some safety features built in to protect the expensive bought in items, and also some ways to improve the signal integrity of some of the signals.

The result was a low cost but fully custom designed RADAR interface card – a multilayer Printed Circuit Board ( PCB ) with surface mount components on one side only and the variety of connectors that allowed simple connection to the other parts in the system.

After successful testing of the system, a further 30 of these boards were produced.

This project is all well within the capability of Dotstar Design – Our CADSTAR can be used to produce the schematics ( circuit diagrams ) and to do the PCB layout and routing. Our expertise in hardware design and signal integrity allows us to use these tools effectively to get you the best results. Our production using vapour phase soldering and test equipment is capable of manufacturing and testing these quantities of hardware “in house”.

If you have a similar requirement please contact us.