Lead free assembly requires tight control of temperature. Infrared reflow is difficult to set up and use for low volumes. Vapour Phase is a safe and reliable method for assembling low volumes of products.

When assembling a Printed Circuit Board (PCB) with surface mount components, the board first has solder paste screen printed onto it, and then the components placed. Finally the solder must be re-flowed (melted) so that it flows onto the pads of the PCB and the leads of the components. When the assembly cools the solder forms a mechanical and electrical joint between the two.

Regulations have been introduced to prohibit Lead (Pb) (which was used historically) from the solder that is used, so modern assemblies use a lead free solder alloy such as Tin/Silver/Copper (SAC). This melts at 217 C but the assembly needs to be taken above this to make sure that the surfaces are properly wetted. Normally 230 C is the aim, so that if you achieve within some degrees of that you are still OK. Flux is included in the solder paste to help to clean the oxidisation from the surfaces and ensure that the solder flows over the whole of the surfaces.

Of concern during this process is that components are manufactured with materials that have a melting point, and the PCBs themselves are made using glues that are themally activated. Taking any part of the assembly above 260 C can cause a multitude of problems.

For years the soldering of surface mount components generally used infrared (IR) Reflow. After applying Solder paste to the PCB, and placing components, the assembly is put onto a conveyor belt that transports it through the tunnel of a reflow oven. An IR reflow oven is split into multiple zones, each with its own controller that allows you to set a temperature that it will attempt to maintain. The “power” from each zone is radiated at your board assembly, where it is absorbed by the different components at different rates.

You form a thermal profile for your board assembly by programming the temperature of the zones and the speed of the belt, aiming to get all of your assembly to 230 C, and none of it above 260 C or below 217 C. Now a small black object, such as the body of an IC, that lingers too long can quickly reach very high temperatures, and a large metallic object, such as the pads on a PCB, can take a long time before reaching the required temperature.

Manufacturers of components put complicated pictures of required thermal profiles into their data sheets. The strange shapes are not in themselves necessary – their aim is to get all of the assembly to the target temperature (not above or below) quickly enough that the flux can work, and soldering will occur before fresh oxidisation can occur.

If you have a large production run to make, and each assembly has relatively low value, it is usual to run many of them through the oven, while instrumenting the temperatures at many points on the assembly. Small adjustments are made and the measurements re-run until an acceptable profile is achieved. This “wastes” many assemblies and requires an expert operator.

By taking a fluid that has a very defined boiling temperature, such as Galden LS230 a Perfluoropolyether Fluorinated (PFPE) fluid which is very safe and inert, and boiling it – a vapour is formed that is at exactly the boiling point of the fluid. If you suspend your board assembly in that vapour, it will condense on the parts that are colder than the vapour – transferring the thermal energy to that part of the board assembly. Any parts of the assembly that reach the vapour temperature will have no further condensation on them and no more energy will be transferred. It is impossible for any part to exceed the vapour temperature. 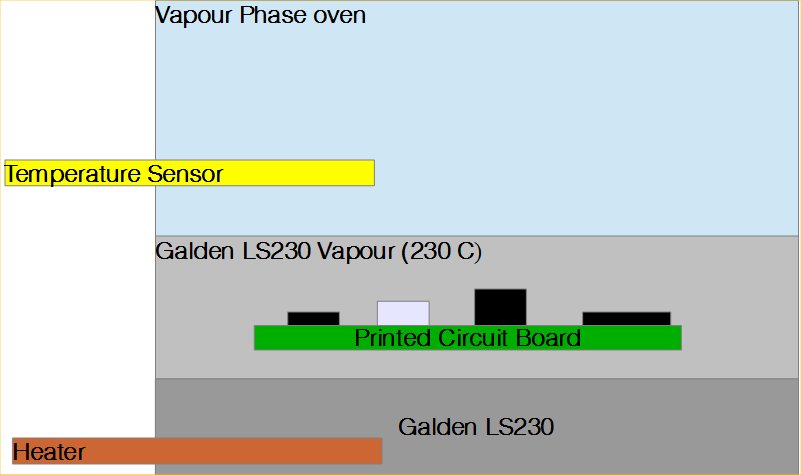 An added advantage of the PFPE vapour is that it forces out all oxygen from the process, so no fresh oxidisation can occur however long it takes to reach the target temperature.

This makes the Vapour Phase process ideal for one off and low to medium volume production of assemblies with no wastage from thermal profiling. It also makes it ideal for very dense boards and or boards with very varied components on them. Using two passes through the oven can be used for double sided boards and components such as Ball Grid Arrays (BGAs) can be fitted to both sides.

At Dotstar Design we have Vapour Phase soldering equipment so can use this to manufacture prototypes and low to medium volume production runs of the PCBs that we design for your project.